From EsoArcadia's Skies of Arcadia wiki
Jump to: navigation, search 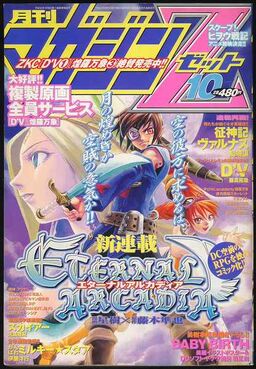 The cover of the first issue to feature the manga

Gekkan Magazine Z (月刊マガジンＺ Monthly Magazine Z) was a mixed media magazine that ran from June 26, 1999 to January 26, 2009, featuring articles and manga. A series of Eternal Arcadia comics was published in this magazine. They were illustrated by the game's official artist, Itsuki Hoshi, and written by the game's official story consultant, Junya Fujimoto.

The name of this manga can be seen on the April 2002 issue cover, however no chapter of the manga can be found in the issue. The index page displays a note on the manga going on an indefinite hiatus: